Congratulations to all the Pup & Cat Co. pets that have found their forever homes. Have a great life with your new families! Check out the Happy Tails photos below.

Happy Beginnings for Miss Primrose! She has found her forever home with Kristi and Darrell. She is already their princess!!

Clyde and his new family Cameron

Prancer and his new family

Lilly and the Claster family

Howie and Michelle and Terry Hans

Bunny and the Bradleys 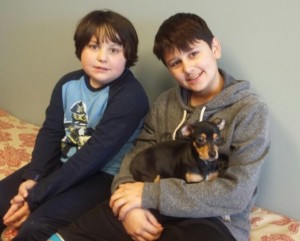 Whisper with Stacey and Matthew Hubert

Sloan and the Young Family

Ben aka Benny and the Scheule Family (June 2015)

Billy and the Horwitz family (June 2015)

Hopper with Stacy Anderson and Jesse